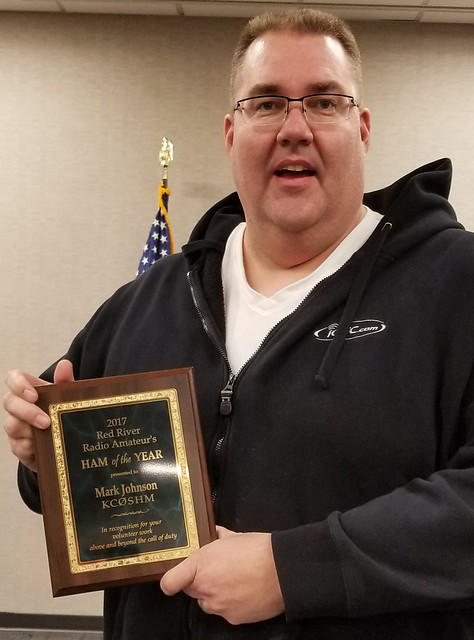 The 2017 RRRA Ham Of The Year award was presented to KC0SHM at the January, 2018, business meeting in recognition of his volunteer work above and beyond the call of duty.

It is time for annual RRRA membership renewal. Club dues are unchanged from last year.

Please print out the membership application and bring it, along with your dues payment (cash, check or money order) to the next club meeting.

You may mail your membership application and dues payment if you are not able to attend a club meeting. Our mailing address is:

On January first, I began serving as your Dakota Division Director. I want to thank Kent Olson KA0LDG for the serving as our Division Director, Vice Director and North Dakota Section Manager. He has been a great role model for me as I learned the ropes as your 2016-2017 Vice Director. The past eleven days have gone by quickly as 2018 Vice Director Lynn Nelson and me prepare for next week’s ARRL Board of Directors meeting in Connecticut. I have completed my review of the motions being proposed to date, which have been posted to the Division web site so you can form your own opinions. 1

Director Holden goes on to discuss his positions concerning the various motions and requests member feedback.

ARRL Dakota Divison members are encouraged review the following documents and contact Director Holden (K0BBC) before the January 19th board meeting about the various motions which will be presented.

ARRL leadership policy and governance actions taken over the last two years—along the actions planned to be formalized at the Board meeting in January 19, 2018, in Newington—have become a source of concern, among some members, about the future of the League. Enough concern was raised that, “in December 2017, a small group of passionate, long-time supporters of ARRL [including Life Members, Maxim Society Members, Legacy Circle Members, Past Vice-Directors, and Volunteer Counsel] … banded together as myARRLvoice to better understand the issues, to educate the community and to advocate for positive change.” 1

Subsequent to the formation of myARRLvoice a Facebook Group and Twitter Feed were established to provide venues for discussion about, and to raise awareness of, these issues.